Yesterday was another cold, overcast day. Since I had nothing to do, around lunchtime I decided to make bread. I was searching recipes when I found this one for Bubble bread in a book called Basic Baking. The recipe reminds me a lot of ones I have seen here in the blog world for something called Monkey bread. It is something I have wanted to try since I first read about it, so as women are prone to do, I changed my mind and decided to make Bubble Bread instead.

In large bowl, mix together 2 cups flour, sugar, salt and yeast. In another bowl or large measuring cup, mix water, milk and butter. Microwave until just uncomfortable warm and butter is melted.

Add to flour mixture and beat until well blended and gloppy. Stir in eggs, then add remaining flour by half cupfuls until it is to difficult to stir.

Dump onto floured board, knead 6 to 8 minutes adding flour as necessary. Form into a ball and put in oiled bowl, turn dough in bowl until completely oiled. Cover at let rise in warm place until doubled, about 30 to 40 minutes.

Punch dough to deflate, knead a few times and form into two balls. Wrap and refrigerate or freeze one. From the other, make the bubble bread by pinching off small bits of dough, rolling into balls, dipping them in the melted butter and then cinnamon sugar mixture. Set the sugared balls into a greased 9 inch bundt pan. After a layer of dough balls, sprinkle in a few raisins and nuts. Continue in this manner until the dough ball is used up. Cover and let rise for another 30 minutes or until doubled.

Bake at 375 F for 30 to 35 minutes. Invert pan onto rack to cool. When cooled, drizzle with glaze if desired. 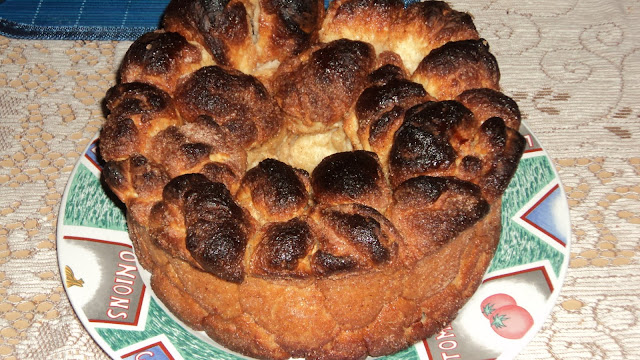 I skipped the nuts and raisins, I am out, and the glaze, just because I thought they were sweet enough. Since I do not have a bundt pan, I decided to use my Dutch oven. It burned a bit on the top and the middle would not cook, so I ended up using a fork to pull the two centre balls out, and within a few minutes it was done. 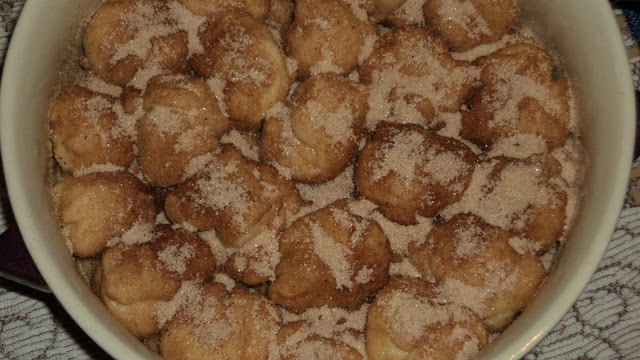 I had plenty of cinnamon sugar left over, so I gave it a sprinkle on top. I only made two layers, I considered a third, but glad I decided against it because once it had risen it was huge! 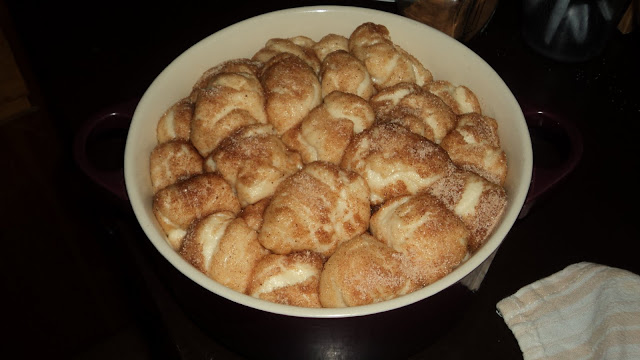 I had a bit of leftover dough, so I made a few cinnamon rolls out of it. I also used the mixer to do all the kneading for me, my mixer almost rocked of the counter! I am glad I caught it, that would have been a disaster! 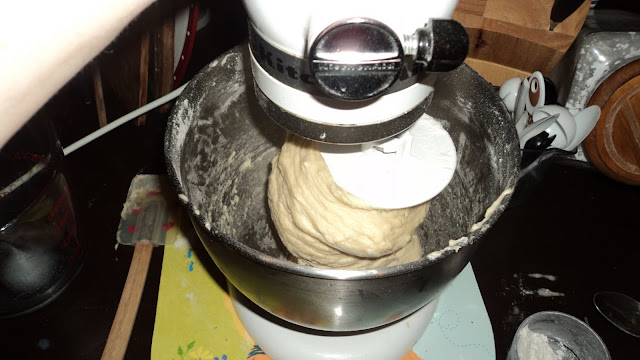 It was a simple recipe and delicious! I will be making it again, but i think I will turn the oven down a bit. Now I just have to stop myself from plucking a piece each time I walk past! 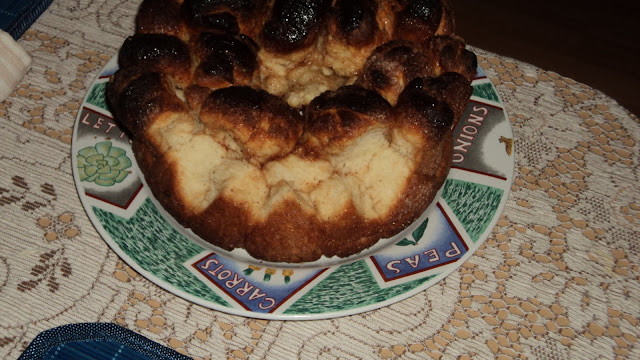 Yummy! Have a good day everyone!!