I seem to be finding a lot of recipes on Pintrest lately, this is another Pin i found that led me to a blog called Alphabet Soup. I have made snickerdoodle cookies once before, but it was years ago. A lot of the recipes call for cream of tarter, something I usually do not have because I do not have many recipes that calls for it. I made these yesterday because I was also making some cinnamon-applesauce ornaments for Christmas, and I was told it would be a tease to make the house smell so yummy and not get anything edible out of it.

In mixer, cream butter and sugar. Add egg and mix until combined. Add milk and vanilla, mix well. In another bow, combine flour, powder, salt and cinnamon. Gradually add to butter mixture, stirring until all incorporated. Refrigerate 30 minutes. Combine 1/4 cup sugar and 1 Tbsp cinnamon. Roll batter into balls and roll into cinnamon sugar. Bake at 375 F for 8 to 9 minutes. 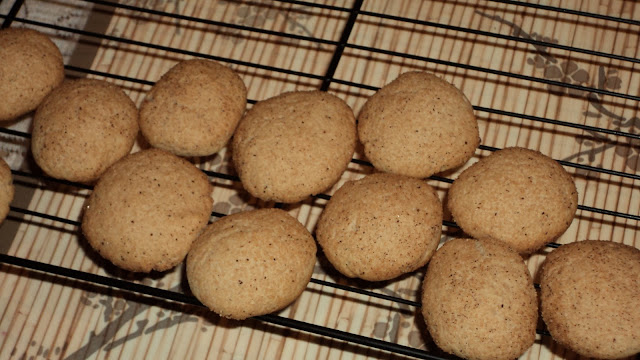 These turned out nice and soft. My only quibble is that they did not expand, they are about the size of a twonie (a Canadian 2 dollar coin). Otherwise, they are delicious.

My ornaments turned out well, to. This is the first time I have made them, all you do is mix 3/4 cups of applesauce with a cup + 2 Tbsp cinnamon, roll the dough out between plastic wrap, cut and bake at 200 for 2 and a half hours. I found this recipe on the spice website (not sure what brand, I just Googled Cinnamon ornaments) 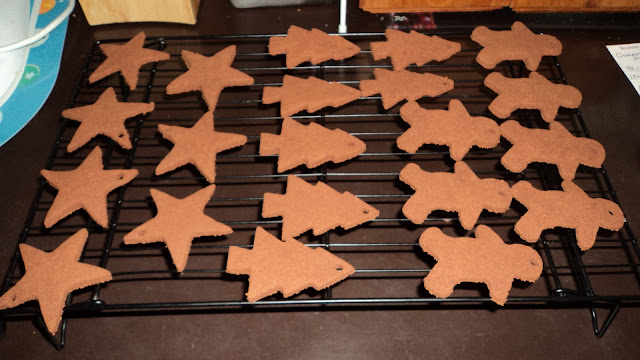 The dough looked very much like red clay that we have around here. There is a gentleman who makes things out of it and sells them in the City Market to the tourists. 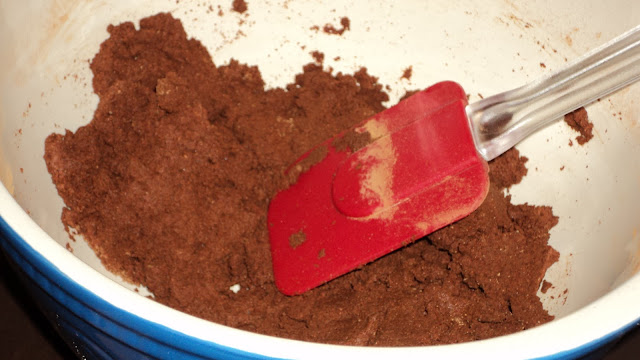 The next day, my house still smells deliciously cinnamony from making these, i think they are a good kick-off to the season! I was planning on waiting to put my tree up until next weekend, but now I am really starting to feel Christmassy and may end up doing it today!

I hope everyone is having a great December so far, and that as Christmas comes closer you have the chance to relax and enjoy yourself with family and friends, after all, that is what the holidays are all about!